If there’s one way in which I would characterize Friday’s materialism sessions, I’d say they were “transgressive,” in that each panel sought to overturn or undermine, or just plain do away with the boundaries between disciplines, between objects, and between epistemologies.

The day’s sessions were:

Each of these sessions was sooo good that they could be summarized in a full blog post. See the storified tweets from them here: 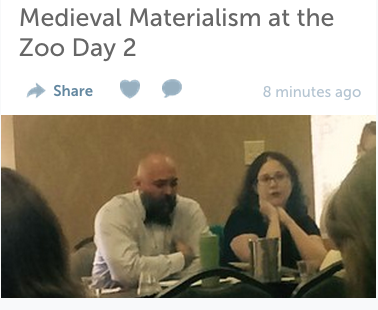 END_OF_DOCUMENT_TOKEN_TO_BE_REPLACED

Day one of #medmaterialism was an exciting one, to say the least!

I’ve storified my tweets of the whole day here:

To roundup all the panels I attended, only half of which were explicitly oriented toward materiality, here is a short list of where I went throughout the day:
What I found really interesting throughout the papers in each of the panels was their intense focus on both bodies–usually human–and signification throughout. For instance, in thinking about Melusine, Angela Florschuetz was emphasizing the way in which the material bodies of Melusine and her offspring were somehow not being taken as materially significant. They had serpent feet, lion claws coming out of their faces, misplaced teeth, third eyes, etc., and yet throughout the narrative there is no indication that these bodily deformities impeded their basic functioning in the world. Instead, these material realities were reduced to signs of the cursed “seed” from which the children came, a genealogy the family seemed unable to overcome.

END_OF_DOCUMENT_TOKEN_TO_BE_REPLACED

As many of you know, several groups made a coordinated effort to plan a pseudo-thread of panels on medieval materialism for the 50th International Congress on Medieval Studies starting tomorrow! The Medieval Institute responded to our desires by honoring our pseudo-thread in scheduling, which means, if your little materialist heart desires it, you can attend a materialism session for EVERY. SINGLE. SESSION. throughout the conference.

And that, my friends, is exactly what I plan on doing with two exceptions–the one where I give my own paper Thursday night at 7:30 on “Revisiting Remediation”–a panel taking up the question of whether or not the DH bubble has burst and what’s next for digital medieval studies. (#s169 Barnhard 205), and of course the one on Piers Plowman on Saturday afternoon (I’m looking at you Karrie Fuller working on Dd.1.17!! Can’t wait!).

Otherwise, I will be attending (or chairing) a materialism session for every single session and live tweeting our pseudo-thread under the hashtag #medmaterialism. I encourage other medieval materialists to also hashtag the same so that we can follow the conversation about medieval materiality on Twitter!